While it is now a grim cul de sac with nothing more than a plaque to offer, Church Lane must be one among the oldest streets in the city as it connects Kevin St to St Kevin’s Church. The church and graveyard, now cut off from the eponymous street, are currently only accessed by Camden Row. This is a pity. 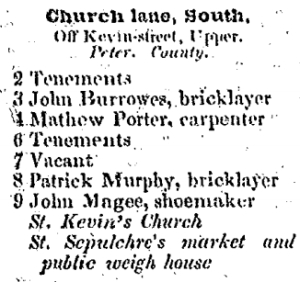 Some caution is required when hunting down Church Lane in the archives. The city had a few Church Lanes, unsurprisingly. Take for example Cathedral Lane, which we met on a previous article in this Kevin St series; it was previously Church Lane. It seems the name Church Lane South was applied to our lane, and on that street in 1842, the occupants included John Burrowes and Patrick Murphy, bricklayers and John Magee, a shoemaker. Elizabeth Delap, a vintner who had been in No 3 in 1840, had disappeared in the two years since.

No through way at Church Lane

An Ordnance Survey map from about 1838 show that there were just buildings on one side of the street. The other side, now DIT Kevin St, was the site of a Fringe Factory. The street ends with St Kevin’s Church, of course, but also mentioned is “St. Sepulchre’s market and public weigh house.” The weigh-master was one of the officers of St Sepulchre’s, responsible for ensuring fair weights for goods (which in turn may have had taxes levied). In general, this term was a modern incarnation of the Office of the Keeper of the Great Beam and Great Balance… That’s a disappointing amendment to the business card.

The Dublin historian Séamus Ó Maitiú has reported in detail the history of St Kevin’s Church, the destination of Church Lane. The earliest mention is in 1179. Kevin is in good company with two other native saints nearby; St Patrick’s, which obviously became the cathedral, and St Bridget’s, remembered now by Bride St. The church’s history thus spanned over 700 years, until 2nd April 1889 when the last vestry was held (Ó Maitiú, 2010). After the church closed, it was replaced by St Kevin’s Church on South Circular Road (Bloomfield Avenue). 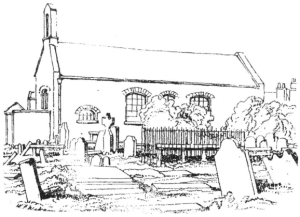 Among the many events over its long history is the baptism of the Arthur, future Duke of Wellington, son of the Earl and Countess of Mornington (See post: Music and Mornington House). In his recent talk at the Irish Georgian Society, Aidan O’Boyle described the Leeson residences at Stephen’s Green and mentioned the church on Camden Row as the family graveyard. There, according to Ó Maitiú, the family tomb has the inscription:

This tomb was erected by Mr Hugh Leeson of the city of Dublin Brewer for himself his posterity the 29th day of January 1685 and now beautified by his Son Joseph Leeson the 14th day of May 1741. Beneath are interred the following members of the family . . .

Included in this list is Elizabeth, Countess of Milltown, who was the third wife of Joseph Leeson of Russborough, Co. Wicklow, the first Earl of Milltown. She outlived her husband by an astonishing 55 years!

There’s an interpretative sign at the Camden Row entrance to the church and graveyard detailing other significant burials there. However I do think the grounds would benefit from having its original entrance reopened, at least during the daytime. It would rebalance the site in terms of connecting it to its original street and the opportunity to use the park as a thoroughfare might help deter the bands of daytime drinkers that make half the park unapproachable for most of the day. Parks with one entrance tend not to do well in Dublin.

A moste pleasante parke, but for the drinkers.

The Freeman’s Journal reported on October 11, 1887 that the Lord Mayor Mr. T. D. Sullivan formally opened the City of Dublin Technical Schools, Science and Art Schools, and Public Library. In his speech, the Lord Mayor said that he was very pleased to open the Dublin Technical Schools, an institution from which he expected great benefit to accrue the working men of Dublin, and to the people of Dublin at large.

They were beginning in an humble way, but great trees grew from small seeds, and he trusted that the institution they were inaugurating would grow to large dimensions, and have a large career of usefulness (applause).

The beginnings of the college can be traced to an Artisan’s Exhibition that was held in 1885 where Earlsfort Terrace currently stands. Concurrently, a government Commission had recommended that technical schools be established throughout the United Kingdom. It was decided to locate the new college on the site of the factory of William Fry and Co—cabinet makers and manufacturers of coach-maker’s wares—at 18, Lower Kevin St. The driving force behind this was Arnold Graves, who is commemorated on a plaque on Church Lane, on the eastern edge of the site. In his speech, Graves said that they had succeeded in obtaining excellent teachers, in carpentering, Mr Philip O’Reilly; cabinet-making, Mr John Frazer; coach building, Mr HE Browne and Mr Gardener; wood carving, Mr James Boyle; metal plate working, Mr CEA Klingner; plumbing, Mr Charles McNamara; and photography, Mr CJ Leaper. The college was supported by subscribers, including the Earl of Aberdeen and his “amiable Countess”. The Earl was Lord Lieutenant of Ireland in 1886.

The college became popular, and in 1895 it rented out 23 Lower Kevin St to provide six extra classrooms. However, pressure for space grew, and the college used locations elsewhere, including Rutland Square (Parnell Square), as well as an old fire station on Chatham Row, which was used for printing classes, and still one of DIT’s buildings. The building at Bolton St opened in 1910. The plots adjacent to the original college were purchased, and in 1955, it was decided to build an entirely new building on the Kevin St site.

It’s hard not to be impressed by the plans and photographs of the new building, taken from a commemorative brochure in 1968 to mark the opening of the new building. The scale of the project and its glass and metal exterior must have looked like a spaceship had landed among the comparatively ancient and run-down houses on Kevin St.

How short those 50 years are. The college, now Dublin Institute of Technology, has long outgrown the footprint of space available, and will move to Grangegorman in 2017. What will happen to the building on Kevin St on its golden anniversary?

The commemorative booklet is available to view of the DIT Historical Society available at this link.