If thou must write and would’st thy works disperse, Write novels, sermons, anything but verse

Samuel Whyte, from an engraving by Henry Brocas (National Library of Ireland – click to go to source)

The quote above is from a letter from Samuel Whyte to aspiring poetess Henrietta Battier in 1790. Sheila Hamilton writes that Whyte was not being cruel in offering this opinion, rather he was injecting a dose of realism: women had no formal education and hence found it difficult to be taken seriously as poets. (She continues that some still tried).

References to Whyte and his school—officially named the “Seminary for the Instruction of Youth”—on Grafton St permeate the literature about many of the great names of the eighteenth and nineteenth centuries. He was born about 1733, and attended what was a famous school at Golden Lane, run by schoolmaster Samuel Edwards. He was the son of Solomon Whyte, and after a poor inheritance (Solomon’s nephew Richard Chamberlain getting the loot), Samuel was encouraged by Thomas Sheridan to open an English grammar school. In 1758, he opened his school on Grafton St., with school rooms on Johnston’s Court, now the site of Bewley’s. His own master’s house was across the school yard. He quickly rose to some acclaim, and it became one of the premier schools in the city. Whyte’s reputation (and association with the Sheridan family) led to him being offered a professorship of English at the Hibernian Academy in 1759. He declined, and devoted his clearly substantial talent to developing his own school. 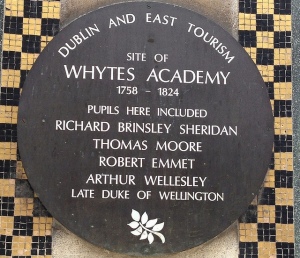 As previously mentioned on this site, the Duke of Wellington was educated here, along with Thomas Moore—whose father had recently moved from Johnston’s Court to Aungier St—and the playwright Richard Brinsley Sheridan, all commemorated on the plaque on the building. Moore wrote:

As soon as I was old enough to encounter the crowd of a large school it was determined that I should go to the best then in Dublin, the grammar school of the well known Samuel Whyte whom a reputation of more than thirty years standing had placed at that time at the head of his profession.

Moore was of course a star pupil. The Dublin Chronicle reported in 1790:

The Public Examinations at Mr. Whyte’s school in Grafton Street closed on the 22nd instant, with an uncommon degree of splendour. A Master Moore, a boy not more than ten years old, distinguished himself in a remarkable manner, and was deservedly the admiration of every auditor.

Whyte’s own interest in poetry and theatre was inculcated in his pupils. After they performed a play on Christmas Eve 1771 at a private house on Capel St, the Marquis of Kildare suggested that they perform regularly for the public, with proceeds going to charitable institutions. Thus, on Jan 2nd 1772, a play was performed at the Theatre Royal on Crow St, with proceeds (£262) applied to liberate eighty debtors from the Marshalsea. Bravo!

From 1792, Whyte’s son Edward Athenry Whyte joined him in managing the Academy. Of course like much else, the school suffered greatly from the repercussions of the Act of Union. Whyte died on 4th October 1811, and Edward continued to manage the Academy until its closure in 1824.

You can receive email updates when a new post is published by subscribing below. A campaign is currently under way to highlight the heritage associated with the Bewley’s building on Grafton St, as covered recently in The Irish Times.