Brother Hubbard at No. 153 Capel St is the unofficial Wide and Convenient Streets pit-stop when exploring the north side. The street itself dates from 1697. The name comes from Arthur Capel, Earl of Essex who was Lord Lieutenant from 1672-1677.While forever immortalised with the street name, he was also previously remembered by Essex Bridge, which connects Capel St to Parliament St. The present bridge was built in 1874 and was since renamed Grattan Bridge. Capel was replaced as Lord Lieutenant by the Duke of Ormonde, remembered around the corner from Capel St, on the quays.

Arthur had great hair, and an even greater wig. One assumes he would be happy then with the tenant at No. 153 listed in 1834: William Finucane was a wig-maker and hair dresser. By 1842, Finucane was listed along with Bernard Murphy, who was both a “builder and confectioner”; perhaps two trades the modern occupiers can relate to. They were joined by John Page, who was a “teetotal refreshment manufacturer”. That must be what they called elderflower cordial in those days. All changed in 1862: wigs and confection gave way to Henry Smith, brass founder, billiard ball maker, and gunpowder agent.

Confection was not to be dissuaded however. By 1901, Delia Dunbar was listed in No. 153 as a manageress of a bread shop which she ran on the ground floor. She was 21 and not married. Over the shop, Michael Hudson, a saddler, lived in the private dwelling with his wife and three young children.

All this talk has made me hungry for a scone and some amazing orange-blossom-buttery-goodness. Yum. 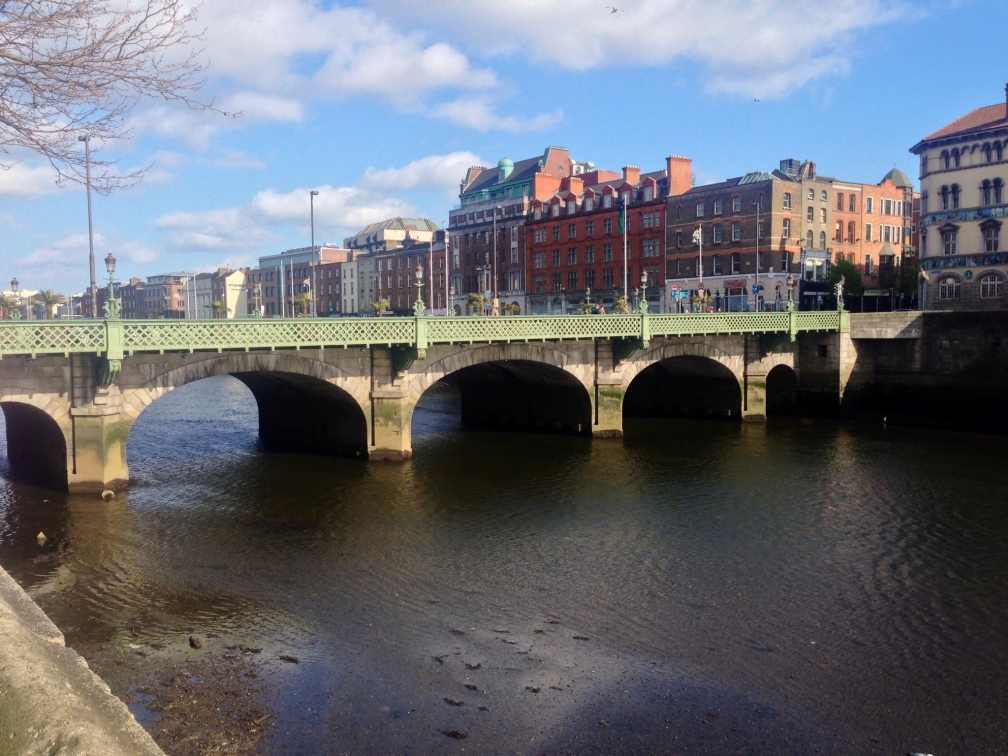 After arriving in Dublin about 1754, John Rocque began his famous surveys of the city. In total, Rocque published six maps of the city; all the more impressive given the short time he spent here. The first was his “Exact Survey of the City and Suburbs of Dublin“. This was published in 1756, and  provides glorious detail of every corner of the city and its suburbs. You can have your very own reduced size copy from the Royal Irish Academy,* or view it online at the Bibliothèque nationale de France at this link. This was later updated by Bernard Scalé, and you can see how useful the comparison is in my previous article on Hume St and Ely Place. This was followed in quick succession by a Survey of the City and Suburbs of Dublin, now also online, and a Survey of the City, Harbour, Bay and Environs of Dublin, online here. Rocque wrote in an accompanying guide to the latter:

But we see in this Map, that Dublin is one of the finest and largest Cities of Europe, as well on Account of its Quays, which reach with Order and Regularity from one End of the Town to the other, as on Account of a great many grand Buildings in different parts on either Side; for instance Kildare house, the Barracks, Hospitals, Parliament-house, the College, and the Castle, which is the residence of the Lord Lieutenent, &c. and also on account of several spacious and magnificent Streets, the Gardens, Walks, &c

In this guide, Rocque also offers his opinion of the locals. They are “frank, polite, affable, make it their pleasure to live much with each other and their Honour to treat Strangers with Politeness and Civility“.

In 1760, he published An Actual Survey of the County of Dublin, which is magnificent—it reaches as far south as Lord Powerscourt’s recently revitalised estate outside Enniskerry in County Wicklow (Rocque knew who paid the bills). That one is visible in the Map Library of TCD. Other maps included an undated precursor to his 1756 map and a 1762 map of the baronies of Dublin, probably published by his wife after his death.

There is something vaguely Gothamesque about the name Richmond Penitentiary. It was first mooted when some land was purchased at the time of the development of Richmond Asylum nearby. Both were named after Charles Lennox, 4th Duke of Richmond, who was Lord Lieutenant of Ireland from 1807 – 1816. In one of those nice symmetries Irish history throws up, Richmond went on to become Governor General of British North America, a role later assumed (in the form of Governor General of Canada) by Charles 4th Viscount Monck. Monck’s uncle (and father-in-law, don’t ask) was Henry, 2nd Viscount Monck, later Earl of Rathdown, who originally sold the land for Richmond Penitentiary in the first place. 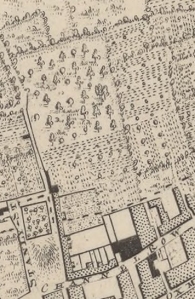 South of the site of Richmond Penitentiary, Rocque 1757. Stanley St is shown in the south-west corner.

The land for the penitentiary had been occupied by Andrew Quinn, who kept an orchard or some form of market garden. It is clear from Rocque’s plan of the city that the entire area was farmed in some way. Grangegorman Lane, on which the penitentiary was built, is just about discernible on the 1757 map. Channel Row—visible at the bottom of the extract shown—was soon to become Brunswick St, so we can use this as a guide to follow the lane north until it peters out, entering into what must have been Quinn’s plot of 3½ acres. 40 years later, the site was a little more developed, with Grangegorman Lane marked (see map). It’s worth noting here some street names in the area: Stanley Street (visible on Rocque) and Monk (sic) Place (visible on 1798 map). These are obviously connected to the Monck family. Stanley is especially important: Sir Thomas Stanley was a Cromwellian soldier who had the lands at Grangegorman. His daughter and heiress Sarah Stanley married Charles Monck, an ancestor of those we discuss here. Stanley St was once a tree-lined avenue to the Manor of Grangegorman, now it is a lane to a Corporation depot, or a “Scavenging Depot and Destructor”, according to one OSi map. 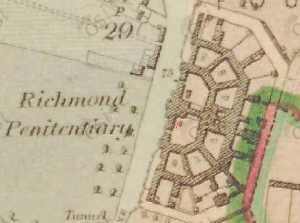 After the sale, Mr Quinn sold his last batch of apples in July 1812, and the wood from the orchard was sold that December. Monck banked £1,100 and a peppercorn (nominal) rent for the land. Francis Johnston was taken on to design the building, having already been employed as the asylum architect. The early nineteenth century was a time when there was a zeal to reform, and rather than send prisoners to far-flung corners of the globe, those with any hope (or potential for Protestantism) were marked for possible redemption and sentenced instead to a local penitentiary, thus the desire for a building in the first place. However, from the time the site was chosen in 1810, it took another decade for the prison to open. The weather vane on the cupola had a date of 1816, and in 1818 the building was used briefly as a fever hospital during a cholera epidemic. The building cost at least £40,000, but was repeatedly criticised for its design (prisons were not part of his repertoire). Johnston’s characteristic “fan” shaped design is visible on the OSi map from the 1830s. Prisoners began their sentence in solitary confinement on the outer confines, and gradually moved towards the centre as their sentence progressed, until they arrived at the workshops at the centre. Each of the cells were 12′ 4 square and 11′ high.

From the outset, the prison was embroiled in the religious debates of the 1820s, similar to those occurring in education, and culminating in Emancipation in 1829. Several boys were transferred from Smithfield in 1821, and the orphans among them were assumed to be Protestant. This was successfully contested by the Roman Catholic chaplain. The tone of the decade in the prison was set. In 1826, the Roman Catholic Archbishop of Dublin, Rev Dr Murray, submitted a memorial on behalf of ten prisoners. The nine men and one woman complained that they had been ill-treated because of their religion, and that proselytism in the form of cruelties, punishments, deprivations and tortures was rife. A 39-day inquiry ensued, which found that while there was mass conversion, torture was not used. Instead, it was ascribed to the “entrance week” that new inmates spent in solitary confinement. After this time, prisoners were asked to state their religion, and it was felt that they may have declared to be Protestant in the hope of an easier time.

Things got worse in the prison after the inquiry. The Roman Catholic chaplain had acted on behalf of the prisoners, so understandably he and the governor were not going to be best of friends afterwards. Conditions in the prison deteriorated and prisoners began to take advantage of low staff morale, and resulting lack of discipline, by committing further “outrages”. At some point it was decided to end the experiment, and just 8 years after it opened, Richmond began to prepare to close. The process took about two years, and the prison closed in 1831. It returned to its former temporary use as a Fever Hospital in time for the Cholera Epidemic of 1832.

The “Clock Tower Building” from the Grangegorman Development Agency website.

The Freeman’s Journal reported on October 11, 1887 that the Lord Mayor Mr. T. D. Sullivan formally opened the City of Dublin Technical Schools, Science and Art Schools, and Public Library. In his speech, the Lord Mayor said that he was very pleased to open the Dublin Technical Schools, an institution from which he expected great benefit to accrue the working men of Dublin, and to the people of Dublin at large.

They were beginning in an humble way, but great trees grew from small seeds, and he trusted that the institution they were inaugurating would grow to large dimensions, and have a large career of usefulness (applause).

The beginnings of the college can be traced to an Artisan’s Exhibition that was held in 1885 where Earlsfort Terrace currently stands. Concurrently, a government Commission had recommended that technical schools be established throughout the United Kingdom. It was decided to locate the new college on the site of the factory of William Fry and Co—cabinet makers and manufacturers of coach-maker’s wares—at 18, Lower Kevin St. The driving force behind this was Arnold Graves, who is commemorated on a plaque on Church Lane, on the eastern edge of the site. In his speech, Graves said that they had succeeded in obtaining excellent teachers, in carpentering, Mr Philip O’Reilly; cabinet-making, Mr John Frazer; coach building, Mr HE Browne and Mr Gardener; wood carving, Mr James Boyle; metal plate working, Mr CEA Klingner; plumbing, Mr Charles McNamara; and photography, Mr CJ Leaper. The college was supported by subscribers, including the Earl of Aberdeen and his “amiable Countess”. The Earl was Lord Lieutenant of Ireland in 1886.

The college became popular, and in 1895 it rented out 23 Lower Kevin St to provide six extra classrooms. However, pressure for space grew, and the college used locations elsewhere, including Rutland Square (Parnell Square), as well as an old fire station on Chatham Row, which was used for printing classes, and still one of DIT’s buildings. The building at Bolton St opened in 1910. The plots adjacent to the original college were purchased, and in 1955, it was decided to build an entirely new building on the Kevin St site.

It’s hard not to be impressed by the plans and photographs of the new building, taken from a commemorative brochure in 1968 to mark the opening of the new building. The scale of the project and its glass and metal exterior must have looked like a spaceship had landed among the comparatively ancient and run-down houses on Kevin St.

How short those 50 years are. The college, now Dublin Institute of Technology, has long outgrown the footprint of space available, and will move to Grangegorman in 2017. What will happen to the building on Kevin St on its golden anniversary? 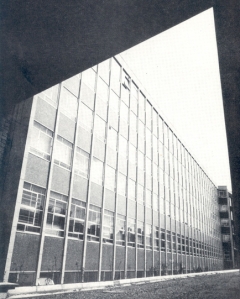 The commemorative booklet is available to view of the DIT Historical Society available at this link.