This is the final post for the foreseeable future. Thank you to the many subscribers and visitors to the blog. I leave for now with a note on Heuston Station. 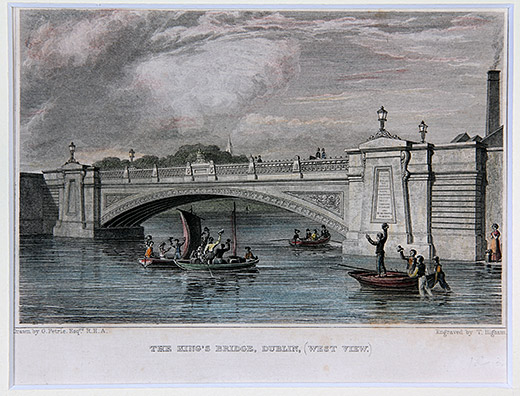 Although the establishment of a Commission for the development of a railway network in Ireland in 1836 was motivated by military needs, the subsequent lines built saw the end of canal passenger transport in 1852 and crushed the long distance coach business. With the establishment of The Great Southern and Western Railway Company in 1844, there was a need for a site to act as a terminus for all lines from the south and west parts of the country converging in Dublin. The site at Heuston, selected by Sir John MacNeill, was attractive given that it approached the centre of the city; a contemporary pamphlet advocating this site remarked that the Liffey “divides [the city] into two nearly parts. The terminus at King’s Bridge, will therefore be on the centre line of the city.” It was also convenient to the Royal (now Collins) Barracks, and thus allowed for easy deployment of troops by rail. 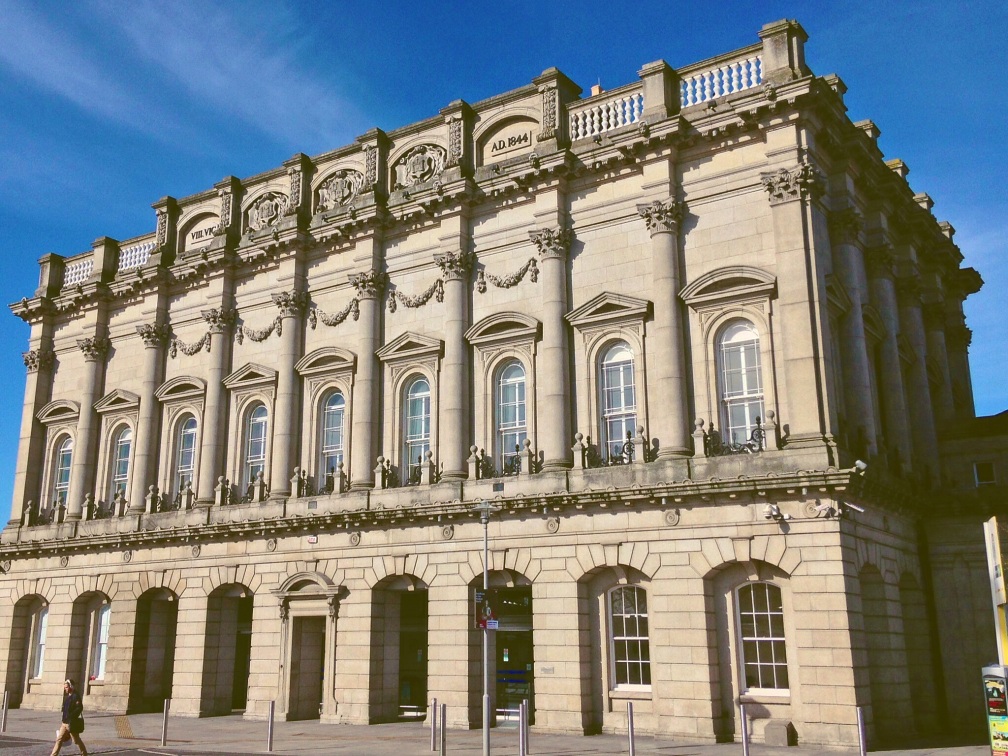 Heuston Station (thanks to B)

The first sod was cut in a field near King’s Bridge (named after George IV in 1828) in January 1845 in a ceremony attended by among others, the Duke of Leinster. According the the Irish Railway Gazette report that month:

His Grace, amid the loud cheers of the assembled crowd, took off his coat and in his shirtsleeves, with the skill and goodwill of an able workman dug up six sods which he threw into a wheel-barrow, and rolled off to some distance. The bonhomie the Duke of Leinster displayed elicited the utmost enthusiasm, and a country fellow turning to one of his companions said with the utmost glee, that he would now die happy, as he had seen a duke work like any common man.

The ceremony was concluded with a very elegant dejuner. 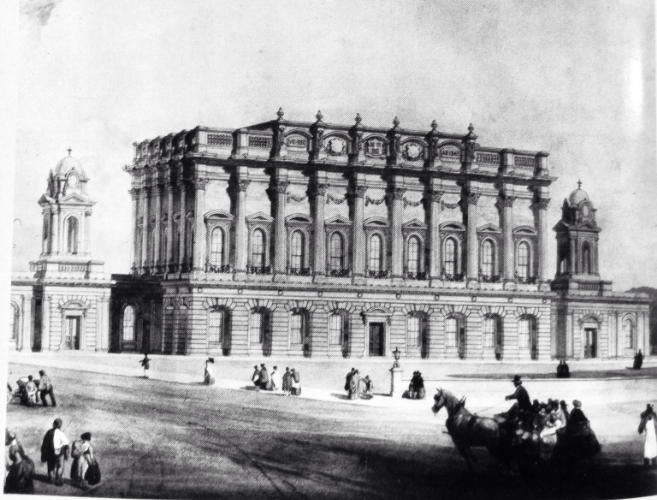 The station terminus itself was designed by Sancton Wood and built by Cockburn and Williams of 179 Great Brunswick St (now Pearse St) using native stone. Completed in 1848, it was Dublin’s third railway terminus, following Westland Row (1834) and Amiens Street (1844). It is a substantial building, 107 feet wide, with wings projecting 53 feet each. Two panels on the front, “VIII VIC” and “1844” indicate the Act of Parliament under which the railway company operated. Between these are the three coats of arms of the cities served by the railway: Dublin, Cork, and Limerick. Descriptions of the architectural significance of the building abound, but I like Craig’s best:

…a delightful building, a renaissance palazzo, gay and full-blooded, with fruity swags and little domed towers on the wings, a thoroughgoing formal composition, excellently articulated. It is the fashion nowadays to sniff slightly because it is not as good as Broadstone: but by these standards few buildings would escape whipping.

In what sounds like a familiar tale, after the terminus of the Dublin and Wicklow Railway was built at Harcourt St in 1859, there was a desire to link up the termini at Kingsbridge, Westland Row, and Harcourt St. In 1867, the City of Dublin Tramways Co. was empowered to develop such a link. The proposed track was to run from Kingsbridge along the South Quays to Westland Row, and on to Earlsfort Terrace. Although work began on Aston Quay, it was quickly abandoned after a row caused by track being used, which left a depression in the roadway between the rails.

Map of Dublin (1847) showing the (unfinished) station terminus at Kingsbridge. (From Cullen, 2015)

The first trip from the station was made in August 1846—they didn’t hang about in those days. A train left Dublin for Carlow at 9 am with carriages of all classes densely crowded with passengers. A trial run had been made the day before to the Curragh, with among others Sir John MacNeil, the man responsible for the enormous railway sheds at the rear of the building terminus, Peter La Touche, Mr Brooke (Governor of the Bank of Ireland), and the Chairmen of both the Paris and Rouen Railway and the Orleans Railway. A dejuner was again served at the Curragh; railway travel clearly being an activity that requires food. Although Independence brought a name change for King’s Bridge, to Sarsfield Bridge in 1923 and Seán Heuston Bridge in 1941, Heuston Station had to wait until 1966 to follow the name of the bridge. A tram now links the station to Amiens St (Connolly) and the missing link to Harcourt St is imminent. All change!   If you’d like to follow my street adventures in a new city, keep an eye out for my new blog later in the summer. In the mean time, enjoy this great song from Boy and Bear: End of the Line.