The street from Castle St to Thomas St first swirls one way as it wraps around Christchurch and along High St, and then swirls the other, as curves around Cornmarket and joins Thomas St at the junction of Francis St.

Ordnance Survey of Ireland Map showing area that was once Main Street, Dublin

In the medieval city (1200-1500), this street was known as the Main Street of Dublin. The eastern end at Christchurch was called Skinner’s Row. Of course Lord Edward St is a recent addition, so what now is a rather awkward arrangement makes more sense in that context; Skinner’s Row continued on from Castle St, and led along the side of Christchurch; the alignment of the Lord Edward public house giving a hint as to the original flow. The “Row” of Skinner’s Row indicates that there was only buildings lining one side—indeed as it is today, with the medieval buildings replaced by Jury’s Inn. While the Dublin historian Sir John Gilbert has proposed that the Row was “a narrow and sombre alley” at just seventeen feet wide, this has been disputed. Hughes has suggested with some confidence that Gilbert has his time periods mixed up, and considers it improbable that the one area of the walled city that was to handle sizeable gatherings of citizens would not have been larger. As well as the Cathedral of the Holy Trinity (Christchurch), there was a Pillory at the eastern end of Skinner’s Row at its junction with Castle St., and High Market Cross at the western end at the junction with High St. Here, it was customary to read out royal proclamations and other public announcements (Hughes, 1941).

The Pillory was a place for public punishment. Even seemingly trivial events could lead to punishment. Bakers who were caught for a third time with a load lighter than stated were subjected to a stint in the pillory, a punishment which along with severe discomfort, carried with it “a degree of odium and degradation”. The punishment was restricted to the crime of perjury during the reign of George III, and finally abolished in 1837 (Frazer, 1886).

Fishamble St (24 on Speed’s Map) is on the eastern end of the Main St. The steep slope of this street, best appreciated by walking or cycling up it, linked the walled city to its port below at the river. In medieval times, it was uninhabited and it served as a location for  fish markets which were brought to shore at the river below. The western end of Main Street was marked by Newgate, which merits its own article.

Before we leave the medieval era, it’s worth noting that rentals of the time giving names and occupations of the tenants demonstrate the city had a high proportion of well-to-do people within it walls. Hughes argues that while there were of course poor people, a reputation of a filthy and neglected city with pigs running through the streets is unfair. 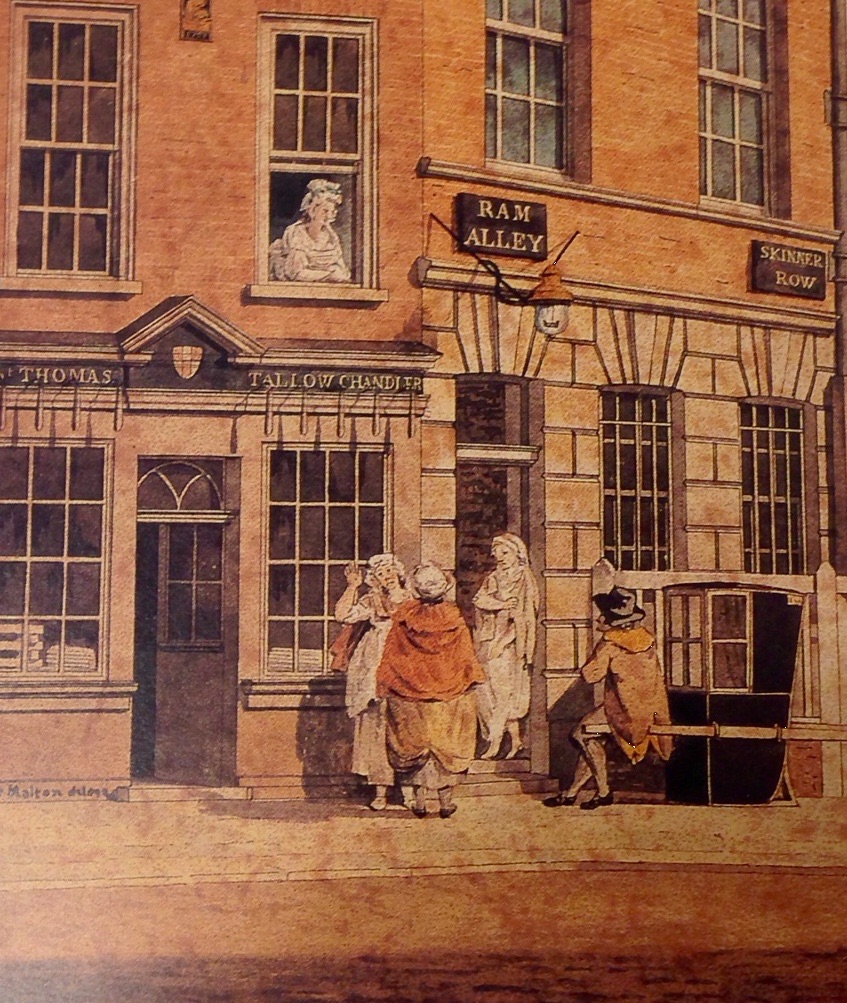 In another age, the area is beautifully captured in some of Malton’s Views of Dublin (ca. 1791). These are discussed in some detail in Edward McParland’s gorgeous essay on their use as a historical source (McParland, 1994). Especially relevant are two of the Views: St Catherine’s Church and The Tholsel. In the latter, the street sign for Skinner’s Row is clear, as is the shopfront of Robert Thomas, Tallow Chandler. McParland has done the detective work to show that Thomas was indeed a tallow chandler at 1 Skinner Row in both 1791 and 1792, but not 1793. Sadly it appears that this accuracy does not extend to all of Malton’s prints; Patrick O’Murphy’s name on a bar has nothing to correlate with in business records. Nevertheless, the prints give us a beautiful representation of how these streets, which derived from the original Main Street of Dublin, looked in the city’s golden age.

The website for Dublin Ghost Signs is well worth a visit. It is cataloguing signs that still exist on Dublin buildings for businesses long gone. Many of the signs are fading slowly, and in time will disappear.

A century earlier, another cataloguing project was prompted by Henry Berry. He compiled a list of House and Shop Signs from the seventeenth and eighteenth century recorded in a variety of sources. Signs, in the sense meant here, were not merely the text above a shopfront, but usually an actual sign or representation. Berry opens his article with a quote from Swift, about the ubiquity of Punch Bowls in signs for Dublin Taverns in 1732:

I have not observed the wit and fancy of this town so much employed in any one article as the variety of signs to hang over houses where punch is to be sold. The bowl is represented full of punch, the ladle stand erect in the middle, supported by one, and sometimes by two animals, whose feet rest upon the edge of the bowl. The animals are sometimes one black lion, sometimes a couple; sometimes a single eagle, and sometimes a spread one, and we often meet a crow, a swan, a bear, or a cock, in the same posture…

The Sign of the Ship, 35 Back Lane, location of Richard Campsie, a linen draper.

Berry lists an impressively large catalogue of signs, arranged by street. The oldest shop sign was the Blue Bell, in Cook St, dating from 1600. Winetavern St had The Three Cups since 1613 and Castle St had a Bear and Ragged Staff since 1668. The latter was the premises of Richard Edwards, Tailor, in 1668 and William North, girdler, 1669.

The variety of animals Swift describes are well represented, but some unusual signs are also present. These include a Golden Stocking, for Anderson’s Stocking Shop on Castle St (1750 – 1760), a Merry Shepherd on Clarendon Market for a shop selling firewood (also 1750 – 1760), and Corelli’s Head for Neal & Mainwaring, music publishers on College Green (1737). Bibles or heads were popular for publishers or book-sellers, like the bible on Patrick Campbell’s, a bookseller, on Skinner’s Row (1696).

Private houses also had signs. The townhouse of the Earl of Kildare, also on Skinner’s Row had the name on it: Carbrie House (Carberry House) – this being the oldest recorded sign in the city. More unusual signs included a Wandering Jew on Castle St, belonging to Cassandra Fyan, widow, in 1669.

For all of his excellent recording, Berry doesn’t show us any signs. He mentions (writing in 1910) that residents of the 60s and 70s would remember a sign outside the Bleeding Horse on Camden St, which was erected on a post on the roadway between Camden St and the now disappeared Charlotte St (more on that story here). But for a glimpse of what these signs might look like, we have to turn to a much shorter article by the antiquarian Francis Joseph Bigger. His sketches are used in this article, and one can only praise the work behind the Dublin Ghost Signs website, which is continuing this work of illustrating old signs of the city before they disappear forever.