The Portico of the Coombe Hospital, built 1877

The Coombe Hospital, now on the upper reaches of Cork St began life in The Coombe itself. After the Meath Hospital moved from the site to Naboth’s vineyard on Long Lane in 1822, the hospital was bought by John Kirby, President of the Royal College of Surgeons, who ran it as a general hospital. According to a contemporary report, the location was apt:

This charitable institution stands in that part of the city where poverty and disease prevail in their most calamitous degree of aggravation; and where accidents, in their severest forms, constantly occur, and hourly demand admission into some asylum where suffering may be alleviated and life preserved. [Wright, 1825]

A plaque on the portico tells us what happened next:

Towards the end of the year 1825, two women whilst making a vain attempt to reach the Rotunda Hospital perished together with their new born babies in the snow. When this became known a number of benevolent and well-disposed persons founded “The Coombe Lying-in Hospital” in the year 1826 for the relief of poor lying-in women.  Leading the Charitable Committee was a Mrs Margaret Boyle of Upper Baggot St, Dublin. 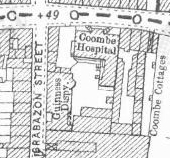 Kirby was replaced as Master in 1836 by Hugh Carmichael, and the name of the hospital changed to the ‘Coombe Lying-in Hospital and Dublin Ophthalmic Dispensary’ — Carmichael had an interest in ophthalmology. In 1838, it was reported that the hospital had 42 beds and “daily affords advice and medicine to about one hundred and fifty extern patients.” The original building deteriorated and in in 1867, the patients were transferred to another hospital on Peter St run by Kirby. Benjamin Guinness and others provided funds for a new hospital which opened in 1877. A dispensary is visible along Brabazon St on the later nineteenth century map of the area, labelled “Guinness Dispy”.

A century after the original building closed, this new hospital also closed, and the new Coombe Hospital opened on Cork St. The portico is all that remains.

The portico surrounding this plaque formed the entrance until the year 1967 when the hospital moved to a new location in Dolphin’s Barn. It has been retained and restored by Dublin Corporation as a memorial to the many thousands of mothers who gave birth to future citizens of Ireland in the Coombe Lying-in hospital and also to the generosity of the staff and friends of the hospital.

The housing scheme which was subsequently erected on the site by Dublin Corporation was officially opened by the Right Honourable the Lord Mayor, Alderman Fergus O’Brien T. D. , on 20th November 1980.